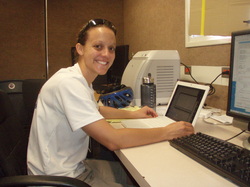 I am currently a research scientist in the Department of Atmospheric Science at Colorado State University working with Eric Maloney and Sue van den Heever. I completed my Ph.D. in Meteorology and Physical Oceanography in August 2013 at the University of Miami's Rosenstiel School of Marine and Atmospheric Science under the supervision of Brian Mapes.
​
My research interests are in tropical meteorology, including:
These interests are motivated by an overarching goal to enhance the scientific understanding of moist tropical convection and improve upon the representation of clouds in weather and climate models (i.e. cumulus parameterization). I use both observations and models to complete my work. Past work utilized space based radar observations from CloudSat to characterize global cloud climatology, as well as clouds associated with the MJO. Cloud system resolving model (CSRM) simulations were used to isolate the role of mesoscale organization in convective scale and larger-scale interactions. Current work will take advantage of observations from the DYNAMO field campaign that took place in the Indian Ocean winter of 2011-2012 and simulations from CSU's Regional Atmospheric Modeling System (RAMS) to better understand the dynamics of the MJO.

https://orcid.org/0000-0002-9474-6545
NEWS:
- I'll be attending the 34th Conference on Hurricanes and Tropical Meteorology in New Orleans, LA. My talk is Tuesday at 9:15 am in the Convection V session.
- Two papers have recently been published in the Journal of the Atmospheric Sciences (see publications tab under more)